Here is a fairly common traditional darning pattern, I think. 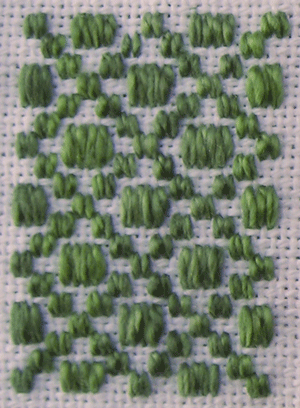 I was playing around with this idea and some of the ideas that Sharon b had posted in her introduction to the running stitch and these ideas started flowing out. I could hear the cry, “a rather wasteful use of the thread”. I shut my ears, ran on and had a lot of fun with these. 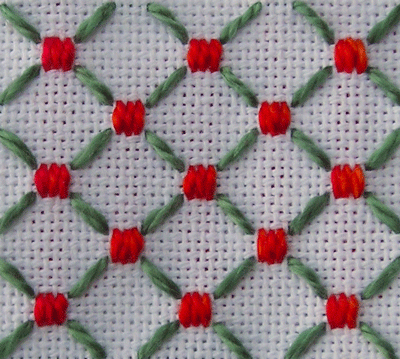 This is a line or border version

I couldn’t bypass trying out a two way version. The red upright cross that you may barely be able to see in this photo is formed by over-stitching on the second pass.

I also wanted to try out beads with the running stitch. And so much more could be done. This was only a stab or two at that.

This is actually my favorite of the day. I’m sorry this photo is such a mess; the thinner thread for the interlacing is really a much nicer brown than is showing up here. But this is a two way pattern that I interlaced and then beaded.

This entry was posted on Saturday, April 28th, 2007 at 9:12 am and is filed under running stitch. You can follow any responses to this entry through the RSS 2.0 feed. You can leave a response, or trackback from your own site.

2 Responses to Running on